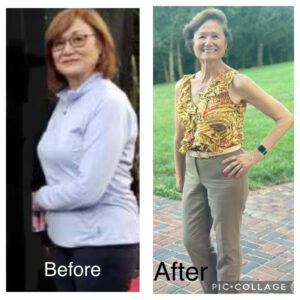 I met Walter many years ago, it may have been in early 2004-2005, when my friend Ramona invited me to join her for a bootcamp session with this trainer named Walter.  She had raved about how much fun it would be so I agreed to go.  As I pulled up to a church parking lot in the Upper Marlboro area, and saw these huge tires, I  stepped back and wondered what I had gotten myself into?  Needless to say, the class was a lot of fun!  I completed the class and thought oh, this was fun, but due to my lack of commitment to exercise, I never went back.  However, through Walter’s consistency in his emails, I did take some of the classes years later that he held in Alexandria.

Fast forward to late March of this year, and having gained over 20 pandemic pounds, I kept thinking that I needed to do something now.  My daughter’s wedding that is scheduled for September was looming in the horizon.  I quickly retrieved one of Walter’s emails and decided to give him a call. Walter happened to be on vacation when I called but he graciously took time to find out what I had been doing.

I explained that prior to the pandemic, I had been working out doing “Barre” in studio anywhere between 4-5 days but not really losing weight nor building muscle and strength.  Then when we were forced into lockdown, I tried the virtual route with Barre, but felt that the instructors were not really paying a lot of attention to the folks that were “virtual” so my desire to continue had waned.  My thought was, “they’re not paying attention so why work so hard.” Anyway, the stars must have been aligned because much to my surprise, a 42 day challenge was going to be starting up in early April.

I went on his website and signed up immediately and just as quickly, I received the instructions for the challenge and how to log my food in the food app.  The first workout was a bit of a struggle but I hung in. I didn’t take the next two classes and during our first one on one session, Walter asked why I hadn’t attended.  So…he was watching. He explained that eating properly is one step but working out consistently and being accountable was the other criteria to seeing the transformation.  From that day forward, I made it a point to take his classes and having him see that I was present!

My goal was to lose 20 pounds by September, and I have lost to date 16.5 pounds total and my body fat went from 37% to 29% over the course of two 42 day challenges. I feel so much better and stronger and that I have 11 more weeks before the big day!  I can definitely see more definition and muscle and the pants that I could not get into prior to the challenges fit well, actually almost loose! Walter provides a workout regimen based on everyone’s goals.  In one of my one on one sessions with Walter, I shared that I wanted to strengthen my arms so that I could do a push up.  Needless to say, he spent part of a class doing that!  I am sure that the other members attending that day didn’t care for that too much!

Walter and his team have helped me learn how get out of my head, to be accountable to myself but also have some self-compassion.  Today, I look forward to attending my virtual classes and I know that Walter and his team are “watching” us so no slacking!  The workouts are intense, especially the kickboxing and the bootcamp on Saturday!  They are fun, and a great way to get you moving that day!

I feel so empowered that I was able to accomplish my goal sooner than later.  Last week was my daughter’s bridal shower and folks that I hadn’t seen in the last few years definitely saw a huge difference in my overall appearance. Thank you, Walter for guiding me throughout these weeks and helping me realize that I could get to my goal. My journey is not over yet, but I feel that it is definitely achievable!